Are You Ready to Shift Left with Digy4?

The Nucleus of Software Engineering

What stage do they occur at? Close to the code vs close to the release?

How often do they happen? During validation checks for every PR or once a week for many PRs together?

How fast do they happen? How fast the checks running – in few minutes or few hours?

This will determine how productive your engineers are, how production ready your changes are and how happy your customers are.

The Evolution of Frequency of The Releases

Ten years ago, it was normal to release to production once every 6 months, but now with technology, the cloud and evolving practices in software engineering like monolith to micro services and micro-frontends, every change could go to production independently.

Further to the Left

Shift Left is not just about running tests at the PR level, it could further go left, means scrutinizing the design, api specs, architecture, and customer requirements as early as possible, even before they become part of the code base.

Shift Left for All

Shift Left is also not limited to a particular type of application, it could also be applied to web apps, micro-front ends, monolith apps, micro-services and include AI/ML model pipelines as well.

First, establish your current pain points based on how things are now, then explore and calculate the value you will get if you follow shift left.

This will help you establish the return on investment, which you can then use to convince the team and management why it is important to implement shift left and estimate which area or areas you need to invest in as well as determine how much it will cost. It is imperative, that the cost be a fraction of the amount you are trying to save. 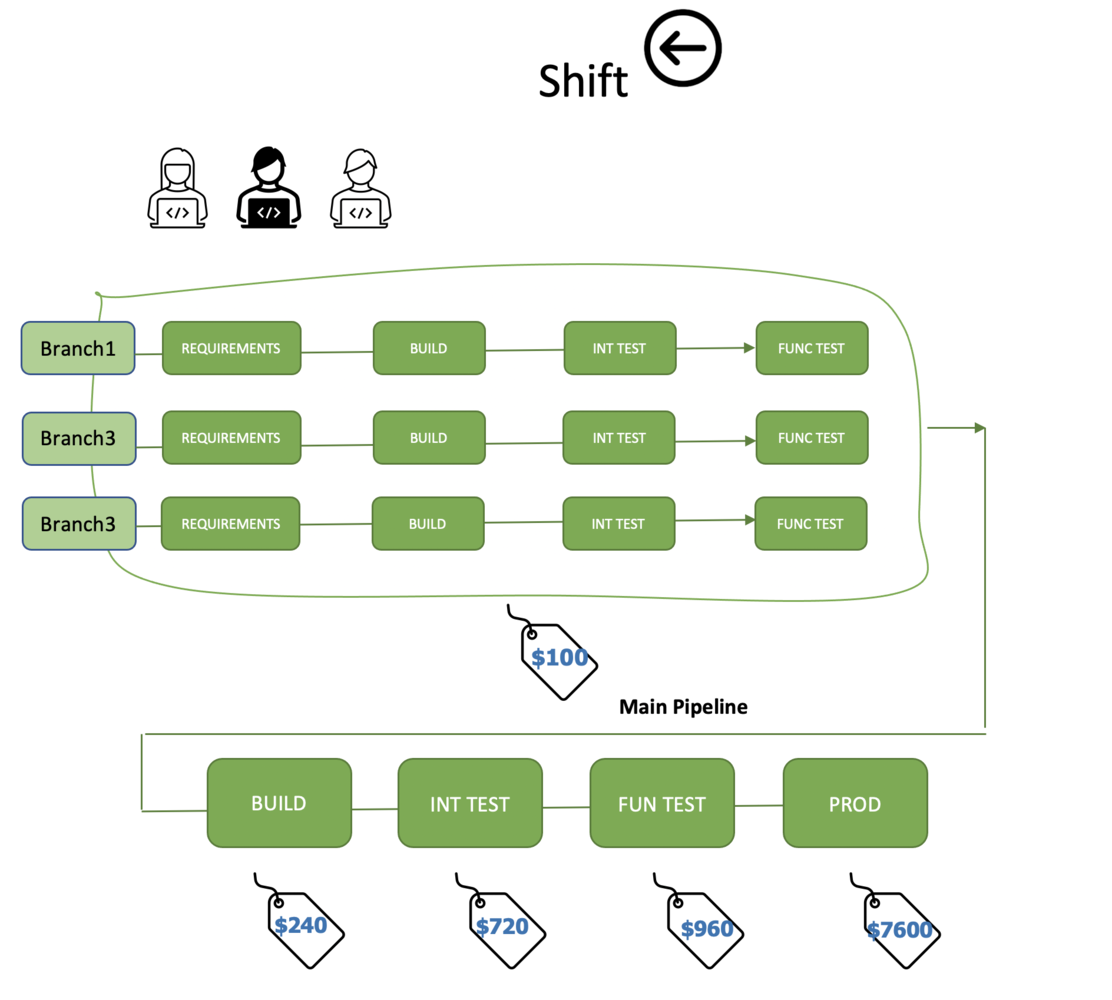 Some points that would help you with the above calculations and investment areas are:

Some points that would help you with the above calculations and investment areas are:

Indicators that show, it is time to implement Shift Left:

Once you answer these, you will be able to better understand where your team/organization currently is, what and where you can improve, the ROI and what you will have to do to get there.

1.    If your team had 1000 PR in a year, Shift Left could save you 4 hours per Pull Request which would mean the productivity saving would be equal to 2 engineers working an entire year for free.

2.    If you had $500,000 USD revenue loss in production, you could prevent future revenue losses by spending 10% of that which would result in millions of dollars in savings.

Introduction of GitHub Actions and similar tools like GitLab CI and Azure DevOps are some examples of tools, that allow Shift Left to be implemented right in your code repo itself, without having to use another tool.

Besides tools, implementing Shift Left requires a change in mind set. Engage with individuals in different teams who you think will be interested and show them the problem statement, solution and the benefits and ask for their feedback so you can collaborate with them to implement the solution.

Paving the way for Shift Left

3.    DigyKube BYOC also provides a built in comprehensive dashboard to drastically reduce the test failure analysis time. This would be a one stop shop to see automation execution (API, UI, Mobile, Cross Browser SaaS) in once place for your entire organisation.

This can reduce the lead time from commit to production phenomenally. 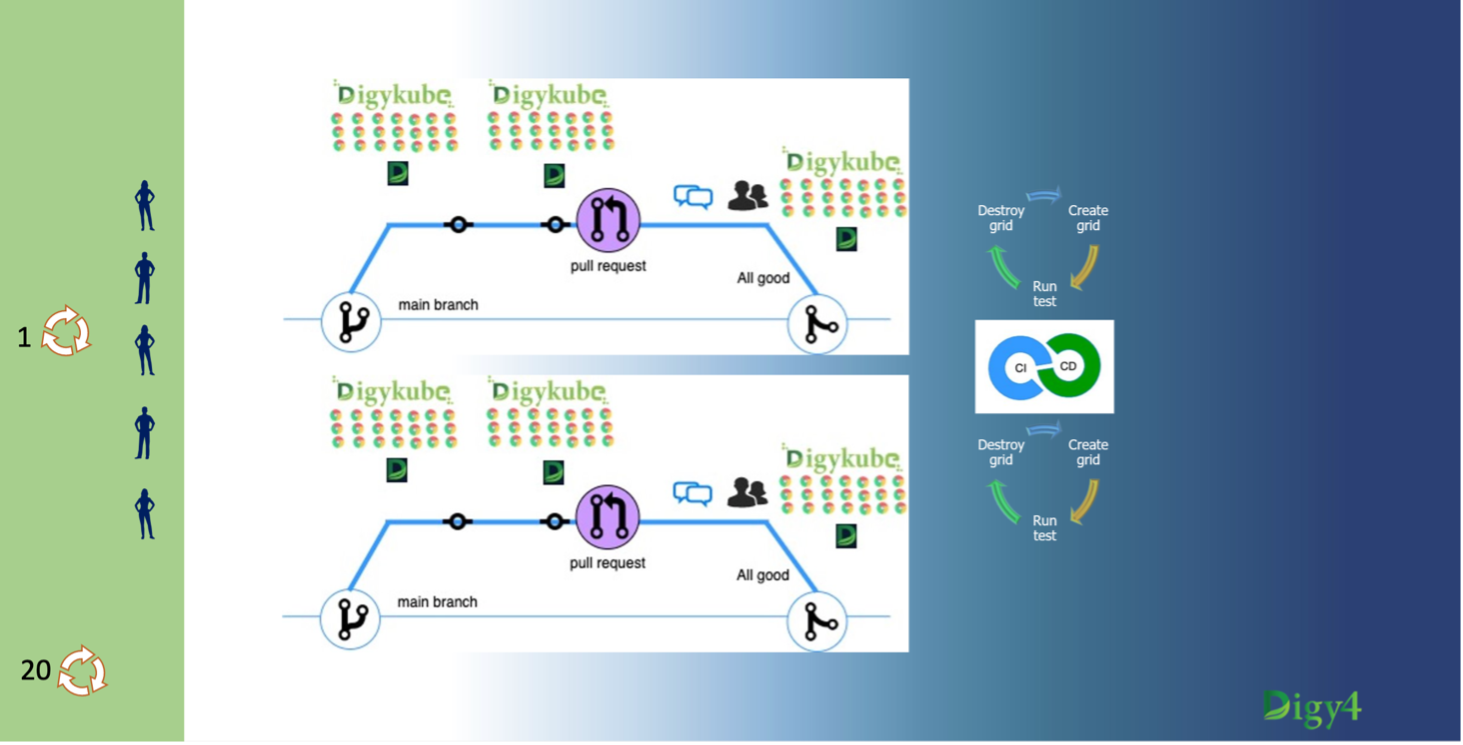 1.    Invest in adopting best practices of writing unit test every time a new code is written and increase the coverage.

2.    Automation results cannot be relied upon if its flaky and not trustworthy. Invest in stubbing / mocking solution so that automation will be stable and reduce flakiness to a greater extent.

3.    Have proper API based test automation and contract testing as well

4.    Each automated test must be atomic, independently runnable, small, and stable.

6.    Digy4 Test Data for Automation solution would also help increasing the reliability of the automation by using a fully integrated TDA solution.

1.    Implementing Fail Fast, Fail Often and Run Fast is important. All three 0f these things tie to your organisation’s ability to run tests super-fast. If you have slow running test suites, you cannot fail fast, you can only fail slow and if you fail slow, then you cannot fail often. Fundamentally if you could run tests concurrently, all three of these become possible.

2.    Implement processes on how PRs should be labelled, to reflect the state (ready for review, ready to deploy, etc) , code review mechanism, rebasing PR and other settings, making use of draft PR, branch protection settings.

3.    Evangelize these practices and make sure everyone on the team follows the same processes and no one is left behind.

4.    Digy360 solution can help here with the Digy Automation Framework.

1.    Start with something basic like containerized app running on Github Actions worker node, then move to Kind (Kubernetes in Docker) and move to proper container orchestration platform like K8s for branch level deployment.

2.    Deploying code, either to production, the test environment or Shift Left, should follow the same approach and use the same technology to be at parity.

3.    Use cost effective solutions like using SPOT instance for Shift Left to keep the overall cost down.

4.    For each branch deployment, the deployed app should be accessible via a url like https://pr-1088-app-name.us-west.test.company.com/ so all validation steps of a particular branch can hit this URL to run the tests.

How can Digy4 help you implement Shift Left?

Regardless of what state of maturity your team or organisation is in, Digy4 can help you get started with Continuous Integration and helm you move to Shift Left.

If you use Continuous Integration tool like Github Actions or Jenkins as an example, by creating different workflows in Github Actions which listens to various events like PR merge, commit, for different types of verifications and validations steps like unit test, UI automation, accessibility test, visual regression, lint, you can control these steps to be run for every commit in a branch or on demand based on a predefined comment string or other events. For example, if you want to run UI automation against your app every time a code is committed to a branch, DigyKube Github Action workflow can create a browser farm with 100 chrome browsers for example, execute your hundred tests concurrently, finish them in few minutes and call another Github Actions to destroy the browser farm and give the resources back to the cloud provider. The artifacts of each of the runs are captured in a database and help you visualize the results via DigyKube Dashboard. Same applies to API, Mobile Web, Native Apps and Hybrid tests, which can be run, and Digy4 Cloud Runner could collect the meta data so the results can be viewed via the same DigyKube dashboard. Digy360 is tool agnostic, it can work with any CI tool, be it Github Actions, Jenkins or anything else.

Customers are the epicentre. There are hundreds of thousands of options available for customers to get from online every day, be it retail, travel or any e-commerce web platform. The catch here is, what they actually need is in hundreds not thousands or hundreds of thousands. If you want to be near the customer all the time, you have to go fast, you have to focus on quality and repeat the process. Are you ready to Shift Left with Digy4?

We use cookies on our website to give you the most relevant experience by remembering your preferences and repeat visits. By clicking “Accept All”, you consent to the use of ALL the cookies. However, you may visit "Cookie Settings" to provide a controlled consent.
Cookies DisclaimerAccept All
Manage consent

This website uses cookies to improve your experience while you navigate through the website. Out of these, the cookies that are categorized as necessary are stored on your browser as they are essential for the working of basic functionalities of the website. We also use third-party cookies that help us analyze and understand how you use this website. These cookies will be stored in your browser only with your consent. You also have the option to opt-out of these cookies. But opting out of some of these cookies may affect your browsing experience.
Necessary Always Enabled
Necessary cookies are absolutely essential for the website to function properly. These cookies ensure basic functionalities and security features of the website, anonymously.
Functional
Functional cookies help to perform certain functionalities like sharing the content of the website on social media platforms, collect feedbacks, and other third-party features.
Performance
Performance cookies are used to understand and analyze the key performance indexes of the website which helps in delivering a better user experience for the visitors.
Analytics
Analytical cookies are used to understand how visitors interact with the website. These cookies help provide information on metrics the number of visitors, bounce rate, traffic source, etc.
Advertisement
Advertisement cookies are used to provide visitors with relevant ads and marketing campaigns. These cookies track visitors across websites and collect information to provide customized ads.
Others
Other uncategorized cookies are those that are being analyzed and have not been classified into a category as yet.
SAVE & ACCEPT